Block 2 – Side Note: With a Little Help From Science

Since the work I’ve been putting into the level design guidance guide has been part of my uni education, there are some requirements on us students. One of these requirements is that we need to have some sort of scientific resource, or the research itself can have a foundation in existing scientific research. With a bit of looking around the school’s research database, I found an article that relates to my research in an abstracted sense, sort of. I hope to clarify why it’s relevant to my research in this post. Just a heads-up though, the article is not formulated in layman’s terms, so I won’t be talking about it in intricate detail, since some of the terminology is very specific. Let’s get started!

The article in question is one called The Encoding of Temporally Irregular and Regular Visual Patterns in the Human Brain. The research that is documented therein involves the use of fMRI (Functional Magnetic Resonance Imaging) to see how and which parts of the human brain react to temporally regular and irregular patterns. For example, one of the patterns that they used involved sequences of colors. One row was arranged in a regular sequence with a clear pattern. The second row was arranged irregularly, without a clear pattern. This was not the only means through which they tested the brain’s reaction to regular vs irregular visual patterns, the examples in the paper also involve sequences of luminance values (brightness), sequences of letters and sequences of numbers. The figure provided with the paper should eliminate any confusion that may have been caused by my descriptions of these patterns, here it is for quick reference:

“Overall, our findings can be summarised as follows: […] 3) For temporally regular patterns, disparate regions are recruited with no common area that responds invariantly across visual submodalities.”

As for the response to temporally irregular patterns, this is where it gets interesting and relevant to the research that I have conducted. The results indicate that there is an area, a confluence of regions as the paper calls it, that responds to the temporally irregular visual patterns. Within this area, there is a region that responds to any irregular visual pattern, regardless of how it’s represented. In other words, there seems to be an area in the brain that collectively responds to irregular patterns, regardless of whether they’re presented in a sequence of colors, numbers, letters or luminance. To quote the paper, the first two summation points from the previously quoted paragraph above say the following:

“Overall, our findings can be summarised as follows: 1) The dorsolateral prefrontal cortex contains a confluence of regions each selective for the temporal irregularity of different visual submodalities. 2) Within this confluence of regions there is a region sensitive to temporal irregularity that is invariant to the submodality from which it is defined.”

This is also noted in the paper’s abstract. I’ll quote from there as well, as I found it was slightly easier to understand:

“The results show that there is an abstractive system in the brain for detecting temporal irregularity, regardless of the source producing it.”

I believe that this is relevant to guidance methods in level design in the sense that; any method that is presented in a form of contrast or irregularity in the visuals would trigger the same sort of instinctive response in our brains as did the presentation of irregular visual patterns detailed in the research paper that I discussed above.
For instance, take an environment presented with a generally cold visual mood, with cool light colors (ranging between blue and turquoise, for example) and/or perhaps a screen effect that rendered the scene in a generally cold color range. Within this environment, you’d want to guide the player towards a control panel that opens a door, for instance. By placing a light source casting a light of a warm hue, in an orange tone, for example, you would be breaking the general mood of the scene’s coloration, which in turn serves as a means to catch the player’s attention. I’ll provide some examples below. 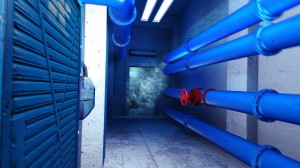 Example 1: From Mirror’s Edge (DICE, 2008.) Here is a scene that is dominated by very cool colors, mostly white and blue. At the right, this pattern is broken by a valve highlighted in a very saturated red color. The player’s attention is drawn to this valve due to how it sticks out. The valve, when used, turns off the harmful steam emitting from the pipes, letting the player continue onwards. (Click to enlarge.)

Example 2: From Portal 2 (Valve Software, 2011.) Most of the test chambers of Portal 2 are made up of walls in shades of dark grey and white. This not only makes the chambers look very sterile. This also enabled the designers to put very bright and saturated colors for the important elements in the levels in order to highlight them. As they divert from the monochromatic foundation, they are very easy to spot. (Click to enlarge.)

Anything that sticks out, diverts from the established norm, catches our interest. This is something that I’ve previously observed in games and their levels, but have not been able to put my finger on why it works. I would say that it is, at the very least, safe to assume that this reaction to visual irregularity might be related to the reaction triggered by the tests conducted and documented in the research paper. I personally believe that it is very closely related. It might even be that the reaction to visual irregularity in a game environment would be triggered in the very same confluence of regions. Perhaps in the same region that triggered the response to the irregular color pattern demonstrated in the paper’s figure. Of course, this is only what I believe to be true. If I had the resources, knowledge and the time to test my theory out in the same manner as in the research paper, I definitely would.

Overall, the paper definitely provides an interesting perspective on how we perceive visual patterns. Given the heavily visual nature of most modern games, I’d say that my theoretical connection between these two is not one completely far-fetched. I hope that this discussion has provided you with some insight and I’d like to thank You for reading (if you did.) Feel free to leave a comment if you have anything to say about it, I appreciate any input or additional perspectives on the matter. For anyone who’s interested in reading the research paper in full, you’re in luck! It is freely available on the net, click here to get to it.

Finally, I’d like to say my thanks to the people who conducted and documented this research and made it freely available. Thank you, Semir Zeki, Oliver J. Hulme, Barrie Roulston and Michael Atiyah.
Complete citation: Zeki S, Hulme OJ, Roulston B, Atiyah M (2008) The Encoding of Temporally Irregular and Regular Visual Patterns in the Human Brain. PLoS ONE 3(5):e2180. doi:10.1371/journal.pone.0002180